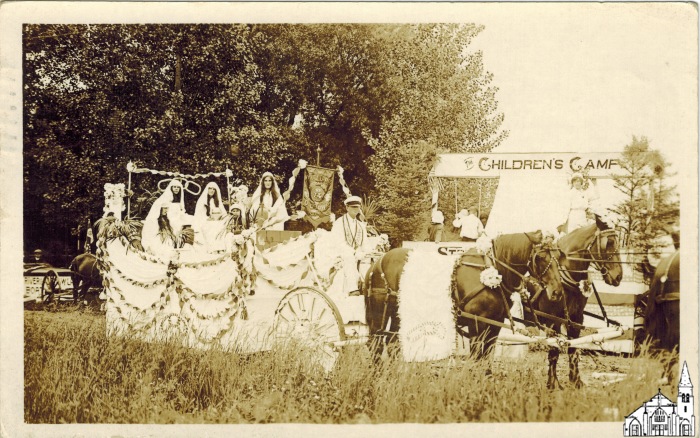 Postcard with a photo of various floats of the 1916 4th of July parade. Depicted are the floats of the Myrtle Rebekah Lodge (with E. Rae Brown as Rebekah at the Well), the Anti-Tuberculosis Association (with district nurse Margaret Hughes) and the Penobscot River and Pushaw Lake Motor Boat Club (with Commandore Butler). The postcard was mailed by Rae Brown to Presque Isle on the 17th of the same month, asking her correspondent if she could find her in the picture. Brown also mentions meeting W. Linwood Chase (1897-1983) of Stillwater, who at that point had just graduated from Presque Isle Normal School and was scheduled to teach in Old Town in the Fall. Ultimately, Linwood would go on to become a noted specialist in child behavior at Boston University. Rae (1895-1965) was born in Mattawamkeag, where her father, John William Brown, was round house foreman for Maine Central Railroad. The family moved to Old Town in 1909, when John William became round house foreman there. In 1921, Rae would marry Louis Littlefield (1882-1957) and the identical twins Berenice ("Bunny") Irene Littlefield Cousins (1921-2014), who stayed in Old Town, and Beatrice Irene Hackamack McCleary (1921-2016), who was a researcher in early computer science at Northern Illinois University, were two of their three daughters.